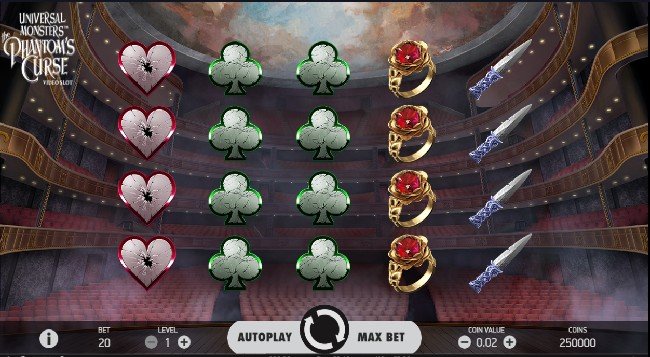 As part of the Universal Studios Monster universe, Netent has created a brand new slot called Universal Monsters: The Phantom’s Curse with 5 reels and 40 fixed paylines. The game has several features including a pick-and-click bonus, free spins, and a Sticky Wild Re-Spin. A total of up to 200 coins per payline!

Behind the transparent rollers, you can see the inside of a dark, foggy, and empty opera house. Among the higher symbols are of course the phantom, his mistress Christine, a ring, a yellow rose, a hand mirror, and a dagger. Lower-grade symbols include hearts, spades, diamonds, and clubs. The orchestral music complements the Universal Monsters: The Phantom’s Curse Slot beautifully and contributes well to the overall dark theme of this game.

In terms of features, Universal Monsters: The Phantom’s Curse features five different game types: One Mask, One Stacked Mask, One Masked Phantom, One Stacked Phantom, and One Stacked Christine. They can all replace other symbols, except of course, as always, the scatter and the bonus symbol.

The Pick and Click bonus is triggered by a stacked Phantom that occupies the 1st reel completely and a stacked Christine that occupies the 5th reel. The bonus consists of two parts, the first of which asks you to select 8 roses on the screen to reveal coin winnings or a blocker “x” that will take you to the second part of the feature. Here you must select one of three mirrors to reveal your multiplier (between 1x and 3x).

The Masked Phantom Re-Spin feature is triggered by a fully stacked masked phantom occupying the 1st reel and a stacked mask occupying the 5th reel. These symbols, along with all other masks and phantom symbols that become visible during the triggered spin, then turn into Sticky Wilds for a free re-spin.

Three chandelier scatter symbols that appear on the odd-numbered reels trigger the free spins of Universal Monsters: The Phantom’s Curse. As the reels spin, a chandelier hanging from a rope attached to each of the five reels appears next to the reels. A masked phantom that looks like a deer lands on one of the reels and cuts the corresponding rope. It is then stacked on the same reel for the duration of the feature. If the connection to all five reels is broken, the free spins end.

The Universal Monsters Slot: The Phantom’s Curse Slot is optimized for PCs, tablets, and mobile phones. So when you’re on the go, you can easily enjoy the game on your Android, iOS, or Windows device.

Free spins: Three scatters trigger the free spins, which can continue until masked phantom land on each of the five reels to cut the rope from which a giant chandelier is suspended. When it appears on a reel, it becomes a stacked game for the duration of the free spins.

Bonus games: The “Pick and Click” bonus rewards you with prizes and multipliers, while the Masked Phantom Re-spin attracts with Sticky Wilds.