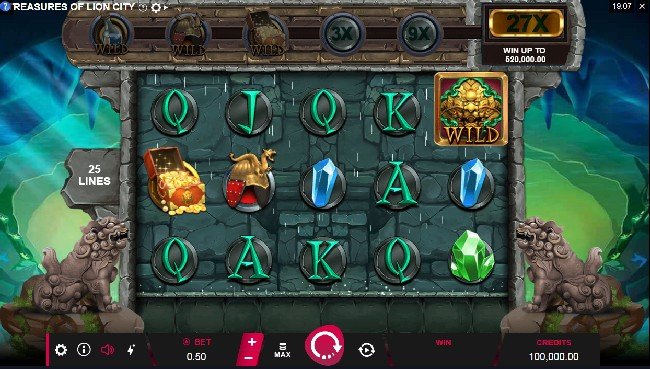 Treasures of Lion City Slot was produced by Pulse 8 Studios for Microgaming. The result is a fascinating slot where stone lions guard the reels, which are also made of stone. The action takes place in a shimmering grey-blue cave, with water splashing atmospherically in the background. The high-quality symbols consist of a treasure chest, a helmet with golden dragon engraving, green and blue crystals. The low-value symbols are represented by pictures typical for poker. The soundscape is epic, also the additional sound effects are great.

Microgaming is undoubtedly one of the most popular game developers and also works with other studios to produce its slots.

Treasures of Lion City has so-called Rolling ReelsTM. This means that in a winning round the winning symbols are removed and replaced by new symbols. Thus further winnings can be made without having to place a new bet. On the first, third, and fifth consecutive wins, a high value symbol is converted to a wild symbol. The seventh, ninth, and eleventh consecutive win triggers a three, nine, and 27 times multiplier. This feature is called Win Meter.

The slot also features a wild symbol that substitutes for all other symbols to form paylines. This symbol is unique because it can trigger a win with just two symbols instead of the usual three. Collect 0.4, 0.8, 3, or 20 times your bet with 2, 3, 4, or 5 symbols on a payline.

Treasures of Lion City is optimized for mobile and desktop platforms. You only need an Android or iOS device if you want to play on the go.

Wild symbol: The wild symbol substitutes for all other symbols and may be the most valuable combination.

Bonus games: Rolling ReelsTM and the Win Meter feature can trigger a multiplier of up to 27 times.