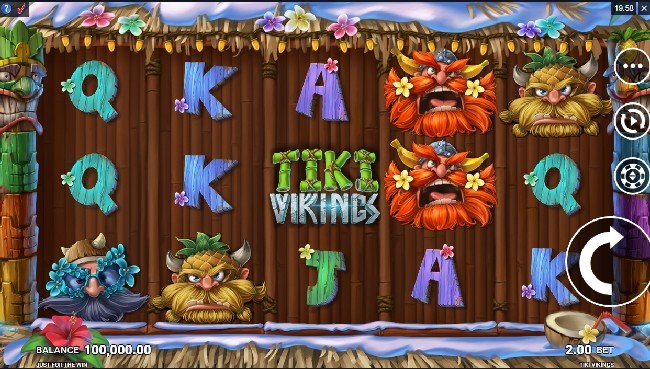 The Tiki Vikings slot. JFTW and Microgaming have jointly launched a new slot in August 2019, which is exceptional in that it combines the already popular Viking theme with the refreshing entertainment of a tropical Hawaiian island. This together makes a 5 reel, 20 payline slot with the Symbol Lock Re-spin feature, and Symbol Upgrade feature that can reward you with up to 15 times your total bet per payline.

The rollers in Tiki Vikings are made of bamboo shoots and decorated with a wooden totem. Behind the rollers, ice-covered hills, frozen lakes, and snow-covered tree tops form a sharp contrast. The higher quality symbols include a logo and three funny looking Viking figures. There are also classic King, Queen, Jack, and Ace as lower-level symbols. The music is dominated by the Hawaiian theme, but there are also other audio effects that are much more Viking oriented and are used for paylines or activated features.

But the first feature we want to address in Tiki Vikings is the Lock Re-Spin symbol. In this feature, the higher value symbols involved in a payline are paired with identical symbols, held in position and thus extend the re-spins. Each round that adds such a symbol also fills the symbol upgrade counter. Filling the counter in turn triggers the Symbol Upgrade Feature. Here the symbols held in position are upgraded to the next higher value when the reel is reset. The feature only ends when no more new symbols can be added. Your payout is then calculated.

Tiki Vikings is optimized for desktop, mobile, and tablet. If you want to play the game on the go, you can do so on both Android and iOS devices.

Bonus games: The Symbol Lock Re-Spin feature gives you the opportunity to build bigger paylines by holding new symbols in place. In the symbol upgrade feature, such symbols are then upgraded to the next higher value.