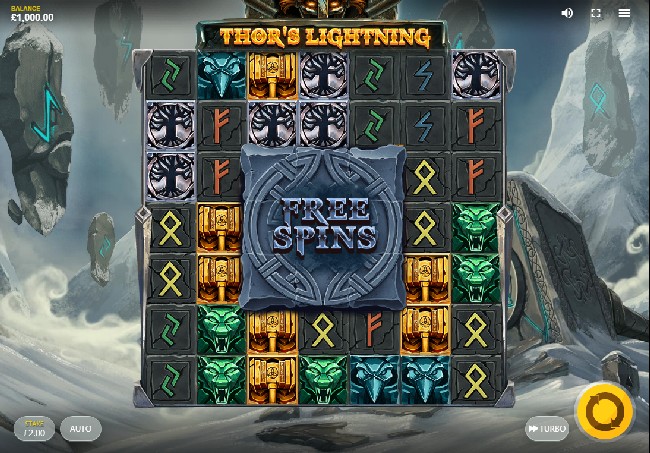 This slot is ruled by Thor, the god of thunder, who plays a vital role in Norse mythology and is almost unbeatable with his mighty Hammer. On five reels, four rows, and either 20 or 40 paylines, you can clear up to €3,000 per payline in Bally Wulff’s Thor’s Hammer!

Thor’s Hammer makes direct use of the Norse world of gods for its symbols, with Thor as the top symbol. That is followed by a goddess, a Viking ship, a bird, a helmet, and a horn. The four lowest symbols are the poker signs. An artistic pattern of Norse symbols can be seen on the reels, and the graphics also make a good impression when viewed as a whole. In keeping with the Thunder God, a drum march sounds when the reels are driven. The thematic sound effects make the game even more exciting and increase the anticipation.

To hammer the winnings out of the reels, the help of the wild symbol comes just in time. This one can substitute for any other symbol except the scatter. The namesake hammer is this very scatter symbol and must appear three times to get you ten free spins. In the free spins feature, the wilds are stacked, allowing for all the higher wins. Moreover, in Thor’s Hammer, this feature can be reactivated if it is already running. As a final feature, you will also encounter the gamble feature. After a win in base mode, available to choose from are the Card and Ladder Gamble features. Both are entirely optional, of course, and already require a certain amount of risk-taking. Depending on how well you guess or react, you will indeed manage to increase your haul.

Thor’s Hammer is unfortunately not available for your smartphone, so you’ll have to do without this game, at least when you’re on the go. Online via your PC, of course, around is always possible! The main prize is €3,000, but there are also some decent prizes to be won with amounts of €2,000, €1,500 or €750.

Wild symbol: The symbol with the wild inscription can substitute for all other symbols except the scatter.

Scatter Symbol: The Hammer is the scatter symbol in Thor’s Hammer.

Free Spins: Gather three Hammer images on the reels, and ten free spins will be unlocked, during which the wild will appear stacked. This feature can also be retriggered.

Gamble option: test your luck and dare one of the two selectable gamble features.