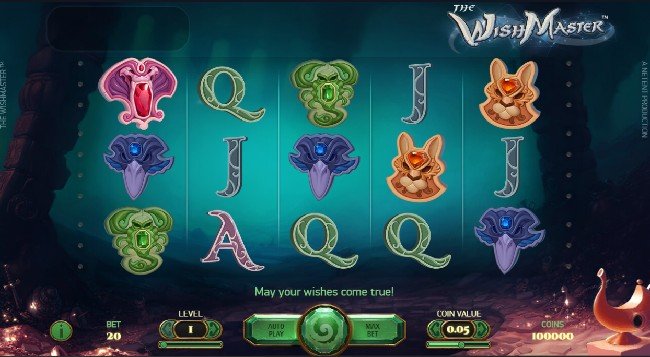 The Wish Master is a slot from Neptune’s laboratory, based on the oriental theme of the genie in the bottle that can make all your wishes come true. On the slot’s 5 reels, 3 rows and 20 fixed paylines, up to 900,000 coins can bubble out of the wonder lamp for you.

The rollers of The Wish Master are transparent and float above a pool of gold. The basic high to medium payout symbols include a ruby, an orange gemstone, an emerald, and a sapphire, all of which are incorporated into elaborate pieces of jewelry. The less lucrative symbols are the poker symbols A, K, Q, and J. In addition to the sound effects on features or paylines, there is also an instrumental melody that plays in the background while spinning.

As soon as a scatter symbol appears on the reels, the genie is released from his bottle and randomly triggers ten free spins and an extra feature. You can also get five more free spins into an extra feature. A maximum of three extra features can run in parallel in this way. The Wish Master Slot also features a wild symbol that can substitute for any other symbol except the scatter. There is also a selection of the extra features mentioned above and when a ruby or orange gem appears, all matching symbols turn wild. Furthermore, The Wish Master has its own wild reel. This means that the entire reel is filled with Wilds. If a scatter settles there, the bonus feature is triggered. But that’s not all, as there is a x2 or x3 multiplier that can be used in both forms and can reach x6. Last but not least, there is a Random Game, where two games are randomly distributed on the reel slots after a spin.

Wild symbol: The game includes a wild symbol that can replace any other symbol. There is also the possibility that all rubies or orange jewels can become wild when determined in the feature selection. In addition, there is an entire wild reel, expanding wild and floating wild.

Free spins: As soon as the scatter appears anywhere on the reels, the genie is released from his bottle and activates ten free spins, which are played with one of five extra features. There is a choice of another game, a wild reel, an expanding reel, a multiplier, and a random game.