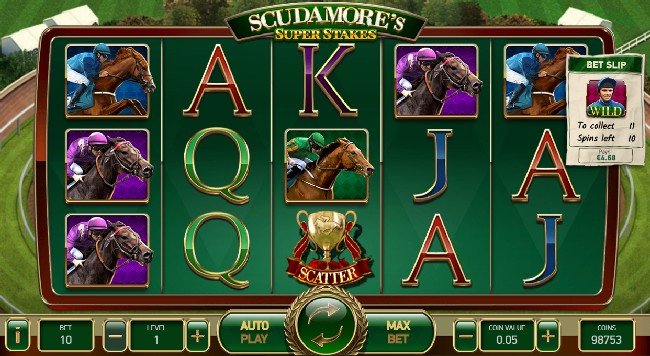 Scudamore’s Super Stakes by Netent is a 5-reel, 32 payline slot based on the incredible story of eight-time horse racing champion Peter Scudamore. The game features the Bet Slip feature, Random Wild, and Peter’s Classic Cup. If you try your luck on the track, you have a chance to win x5,000 your bet.

If we had to give Scudamore’s Super Stakes a color, it would definitely be green! The emerald-green rollers sit on a green racetrack and above them are four high-quality racehorses in red, purple, blue, and green. K, Q, J, and A form the lower-quality symbols in the respective colors purple, green, blue, and red. The soundtrack is simply motivating and stirring and is further accentuated by other audio effects, including the sounds of horse hooves and neighing.

Protagonist Peter is the wild, which replaces every symbol except the scatter and betting slip symbol. You can collect 3, 4, or 5 of him on a payline from left to right to get 100, 300 or 1,000 coins. There is also a second game in the form of a horseshoe that appears as part of the random game feature and can move 2 to 5 games to random positions on the reels.

The Super Stakes Cup on the odd-numbered reels triggers the Peter’s Classic Cup bonus feature in groups of three. Here the number of paylines available to you increases from 20 to 32. If you choose the right color of the winning horse in a race, you win x50, x100, x500 or x5,000 of your bet accordingly. During the race, a horse can overtake another horse if it or its low-grade color equivalent creates a payline during a spin. The first color to win four times during the feature wins the cup. If that color happens to be your chosen color, you win the multiplier.

The Bet Slip feature is a side bet that you can place in the main game. Its function is to track the number of a particular symbol on a specified number of spins and to award a multiplier based on your bet value.

Scudamore’s Super Stakes Slot is designed for PC, mobile phones, and tablets. You can play the slot on the go if you have a good wireless connection and an Android and iOS powered device.

Wild symbol: Peter is the first wild to replace both high value and low-value symbols. The next game, Horseshoe Wild, is part of the random Wild feature where the game is re-placed on the reels in 2 to 5 times.

Scatter symbol: The trophy scatters symbol appears only on the odd-numbered reels.

Bonus games: The Peter’s Classic Cup is unlocked with three scatter symbols. If you successfully predict the color of the winning horse, you can win up to 5,000 times your bet. The Bet Slip feature is paid for and adds a multiplier to a selected symbol depending on how many times it forms successful winning lines in a given number of spins.