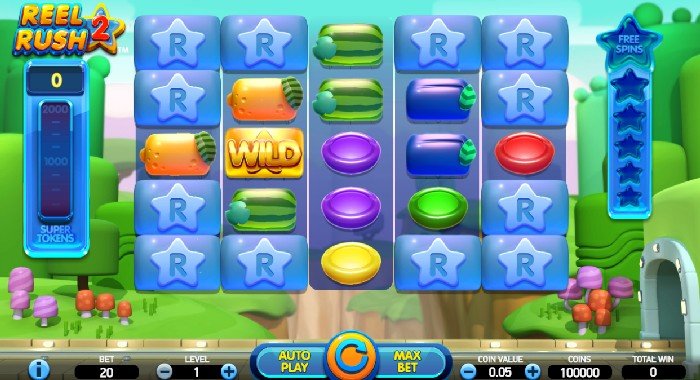 Reel Rush 2 by Netent is the sequel to the original Reel Rush released in 2013. The game is played on a 5×5 grid, the number of paylines ranges from 45 to 3,125, and the maximum win is 5,000 times your bet. Highlights of the game include random features, wild symbols, respins, and a free spin counter.

Reel Rush 2 is a world of its own with strangely shaped trees and other unusual natural elements. The high-quality rectangular symbols include strawberries, pineapple, orange, watermelon, raisins, and plum, among others. The symbols in the middle range of values consist of sweets. In this upside-down world, some amusing sound effects are waiting for you.

The Reel Rush 2 slot comes with a wild symbol that appears on reels 2 through 5 and substitutes for all other symbols. One Respin is awarded for each winning spin. A maximum of 5 Respins can be won, each of which increases the odds as follows:

The number of winning ways is increased with each win by unlocking additional symbol slots. Random features are available in the main game. These include the multiplier boost, second chance, free spins, block breaker, symbol multiplier, symbol upgrade, and random wild symbols.

The Second Chance feature gives players a chance to try again after an unsuccessful spin. The Block Breaker removes two or four blocks, expanding the playing area and winning ways. The Random Wilds feature ensures that between 1 and 3 random Wild symbols appear on reels 2 through 5. The symbol multiplier grants a 20x, 15x, 10x, or 5x win multiplier. It is also possible to upgrade a particular symbol to the next highest value on the paytable. The multiplier boost increases a progressive multiplier by one level. With a bit of luck, you will also clear a free spin.

The last feature is the Extra Spins and Super Extra Spins. These are triggered by a counter and are played with 3,125 winning spins.

The Reel Rush 2 slot was produced in HTML5 and is therefore easily playable on your smartphone, tablet, and desktop computer. The game also accompanies you on the road on your Android or iOS device.

Wild symbol: The wild symbol appears on reels 2 through 5.

Free spins: Free Spins and Super Free Spins are triggered when a counter is filled up and played with 3,125 winning spins.