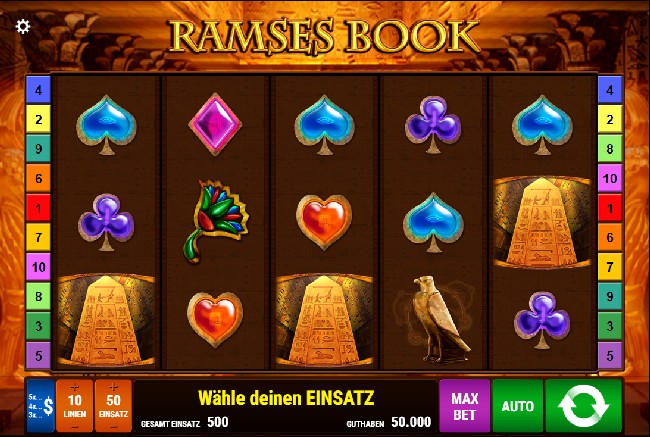 Ramses Book Slot is named after the most powerful Egyptian pharaoh, and Bally presents you with this fantastic five reel, five payline games where you have the chance to win up to €10,000 on one play line!

Ramses Book’s symbols start at the bottom with the familiar playing card symbols of clubs, diamonds, hearts, and spades and rise to colorful flowers, a falcon, cat statues, an obelisk, and the very top of the book and Pharaoh Ramses. The graphics are beautiful 2D images, and there is also a bit of animation. In the standard game rounds, the sound effects and music are average, but there is also a piece of fitting Egyptian style music when the free spins start.

You can play the game with bets ranging from €0.05 to a maximum of €10 on the five fixed paylines. The theoretical payback to the players is 96.15%.

The special symbol in the game is the book, which stands as the wild symbol for all other symbols. The book is additionally also the scatter symbol, and if you get three or more of these on the screen at the same time in a game round, then you will get an instant win and additionally also ten free spins. One of the symbols, except the book, is then chosen as the bonus symbol in these free spins. If the bonus symbol then appears on two or more squares, you will first be paid the standard winnings of the game round, and then the symbol expands to all squares of the corresponding reel on which it appeared. After that, more wins are paid as scatter wins. In case the symbol with Ramses is the bonus symbol, and multiple wild symbols appear on the same line, you will get a payout related to that of the obelisk. The game additionally has risk games, in which you can increase your winnings to a maximum of €150 if they were less than €150.

Ramses Book slot is unfortunately not yet available for mobile devices, but you can play the game on your computer. The special bonus features ensure that you have good chances of winning despite the 5 paylines. If you also like the theme of ancient Egypt, then this game might be interesting for you.

Wild symbol: The book is the wild symbol, and it substitutes for all other symbols for winning combinations.

Scatter symbol: The book is also the scatter symbol, and from 3 symbols, you will get a payout and start the free spins.

Free Spins: From 3 scatter symbols, you get ten free spins, in which a random symbol is chosen. If this symbol appears on two or more reels, it will expand to the reel’s other squares, and you can get additional wins.

Gamble option: you can try to increase your winnings in either the card risk game or the risk ladder to a maximum of €150 if they were less than €150 at the end of the game round.