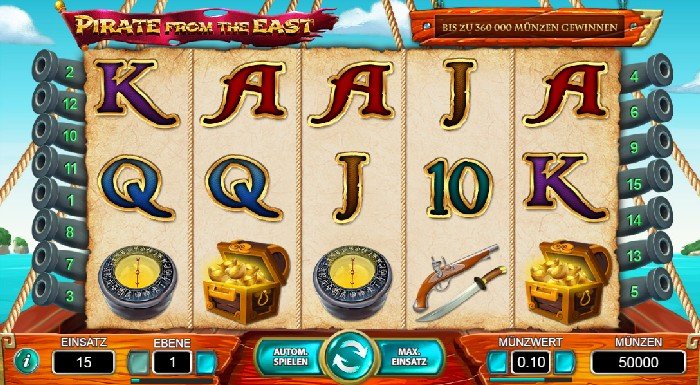 Pirate from the East took the leap into the casino world in December 2019 and originated from the NetEnt gaming workshop. This has equipped the slot with x3 multiplier wild, paying scatters, free spins with multipliers and the prospect of up to 360,000 coins as a top prize.

The Pirate from the East Slot goes on a great journey across the oceans in search of gold treasures and shows as a top symbol a treasure chest that pays out from just 2 symbols. Further pictures show a pirate ship, revolver and saber, a compass, and a beer mug. The less valuable symbols are the five Royal Flush Poker symbols. The soundtrack impresses with waves beating against the bow and releases additional audio melodies when you win or when features are active.

The maritime seafarer theme is always a welcome scenario and so there are numerous other titles of this genre. For example, Golden Tides from 2By2 Gaming, which offers 40 paylines and a maximum win of up to 30x your bet per payline. The underwater world in Golden Tides also features the Wild Mermaid feature, a free spin mode, and the Golden Mermaid Free Spins. Our next tip is Tiki Vikings, which offers winnings of up to 15x your bet per payline. This is where brave Vikings test their strength on a tropical island, which is a lot of fun due to this funny theme alone, not to mention symbol upgrades and a re-spin feature.

There are also two other symbols that we should mention here. First of all, there’s the one-eyed pirate, who comes across as a teenage comic-strip-style guy. As a wild, he replaces every other symbol except for the pistol-wielding scatter and also adds an x3 multiplier to any winnings in which he is involved. As for the Scatter, it needs to be visible 2, 3, 4, or 5 times in any location so that you can dust your bet 2x, 4x, 15x, or 100x. From 3 Scatters on, free spins are also required, up to 28 of them with a multiplier of up to x6. Each additional Scatter in Free Spin mode increases the number of your spins by +1.

Pirate from the East Slot is available in mobile and desktop versions, so you can set sail on any Android and iOS device and try your luck on the 5 reels and 15 paylines.

Pirate from the East Slot

Wild symbol: The wild substitutes for any other symbol except the scatter and also acts as an x3 multiplier.

Free spins: With 3+ Scatters the free spins mode starts with up to 28 spins and a 6x multiplier. Every additional Scatter also gives you an additional spin.