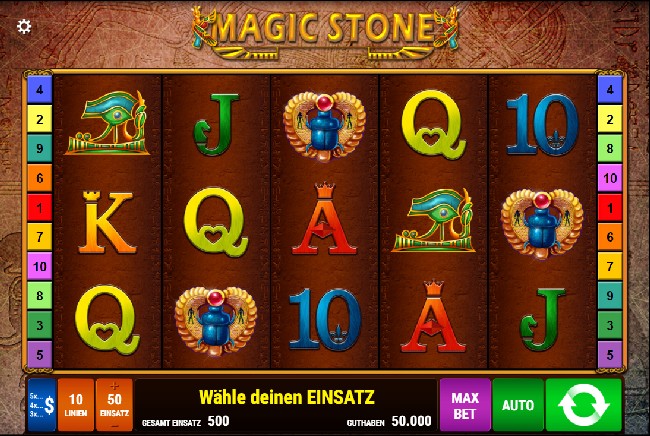 We want to introduce you to Magic Stone by Bally Wulff. This 5-reel, 3-row slot with ten fixed paylines works with Ancient Egypt’s famous theme, specifically its artifacts. While rummaging around, you might even get your hands on an item worth up to €25,000!

As mentioned earlier, Ancient Egypt plays a vital role in Magic Stone. The top symbol is the attractive archaeologist, followed by a treasure chest, a vase, the scarab symbol of the god Khepri and the Eye of Horus until you finally arrive at the bottom with the poker symbols. The graphics are colorful and well done, somewhat making up for the standard sound effects.

The archaeologist acts as a wild symbol and can substitute for any other symbol except the scatter in winning combinations. There is also the stone slab symbol, which turns up to three other symbols into Wilds when it appears on the 3rd reel. The only other feature in Magic Stone is the Gamble feature, which comes in two copies. After small to medium wins, you can choose to take the risk and double your money with a 50:50 chance or lose.

The Magic Stone slot is available as a standard online version, but not in the mobile variant for iOS or Android. Instead, it has a few lucrative wins and an exciting theme to offer. The few features are a bit of a shame, and even though the game might lose its nostalgic feel in the long run, it’s always worth a spin.