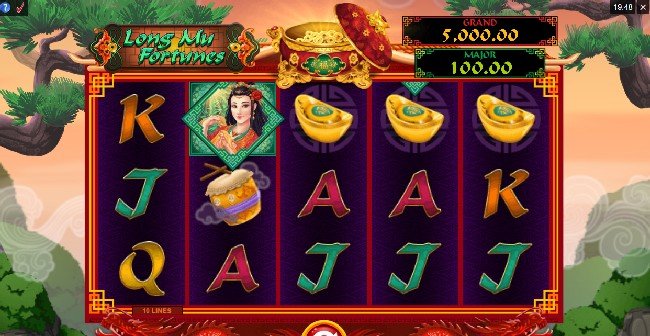 Long Mu Fortunes is a highly volatile slot based on Chinese mythology and the legend of Long Mu. Microgaming describes its design as exuberant, but we wouldn’t go that far here. The pictures and graphics are rather standard and show different gold treasures like coins and nuggets. These are joined by the less lucrative playing card symbols J, Q, K, and A. Musically, the game has chosen a mixture of traditional Chinese sounds and modern sounds that are used for features and winning combinations.

The four wild dragons (red, blue, green, and yellow) can appear stacked and replace any other symbol except the scatter. The red dragon can appear on the second and fourth reels and has the ability to spread out and make its way to the full size of its reel. The re-spin feature is triggered when a red dragon appears and is frozen in place. The feature also uses multiplier game (x1 to x3) on reels two to five. The multiplier value is added together. The red dragon also lets you collect coins that you can use to unlock the jackpot game and then hit the Major or Grand Jackpot.

The final feature in our report is ten free spins with an x3 multiplier game, triggered by scatters on reels two to four.

The Long Mu Fortunes slot is designed to be played on your PC, cell phone, or tablet with iOS or Android operating system, so you can play a round anytime.

Wild symbol: The four different colored dragons are the game and can appear on reels two to four, replacing any other symbol except the scatter. The red dragon can even spread over its entire reel.

Scatter symbol: The scatter must be visible three times for you to win twice.

Free spins: The game has ten free spins with multiplier game worth x3.