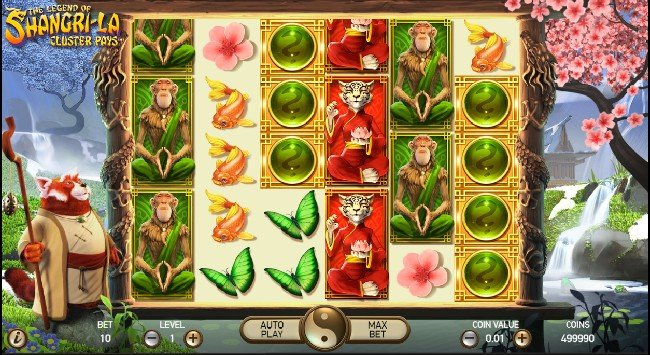 Netent heats up this autumn with his new slot The Legend of Shangri-La: Cluster Pays. It’s all about the beautiful cherry blossom in Japan, impressive waterfalls, and gentle hills full of green grass, which are presented on 6 reels, 5 rows, and in a cluster system. You can win up to 10,000 coins in one round of the game.

The game is based on the works of the writer James Hilton. He had described Shangri-La as the paradise on earth and true to this motto the graphics of the slot are presented. Besides the great pictures, the game design also includes a 3D animated red panda, which you will encounter to the left of the reels and which will accompany you on your journey. His companions include as symbols an elephant, a monkey and a tiger, each dressed like a guru, who can even occupy two positions. There is also a cherry blossom, a butterfly, a dragonfly, and a golden carp. The sound effects are also based on the theme of nature and include the twittering of birds, the chirping of crickets, and the murmur of water. In the background, the rollers are also accompanied by a melodious Asian piece of music.

Winning combinations are generated using the Clusterpays system and not paylines as usual. This means that you win over symbols that are placed vertically or horizontally next to each other. To be successful, you must create a group of at least 9 identical symbols. There is a Mystery Substitution symbol that can turn into another group symbol when it appears. There is also the Random Substitution feature that becomes active when you get two clusters of the same symbol. Until you finally win, at least one Mystery Symbol is placed between your two clusters. The Sticky Re-Spins feature follows as the next extra. It is unlocked by two clusters that have not yet won. These two clusters will be kept while the reels start moving again to make a profit for you after all. You can also dust off 3, 4, 5, or 6 Free Spins if you have collected 5, 6, 7, or 8 Free Spin symbols. On the other hand, if there are only two Free Spins symbols, the Nudge feature will start. However, it only becomes active when the missing third free spin symbol has just disappeared from the reels and was only just missed.

The The Legend of Shangri-La: Cluster Pays Slot was also developed in the mobile version and therefore runs on your iOS or Android smartphone or tablet.

Scatter symbol: A gives a free spin symbol that acts as a scatter.