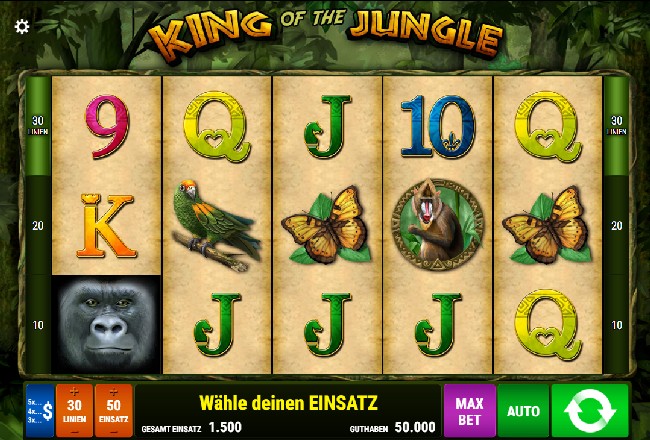 King of the Jungle by Gamomat is a 5-reel, 30-payline slot themed around the jungle, especially the mighty gorilla, which also has the most important role in the game. The highest win per payline is €5,000, and on top of that, King of the Jungle also has an exciting free spins mode with extra wilds to offer.

The symbol world includes mainly animals from the jungle, including the gorilla, a lion, a monkey, a parrot, and a butterfly. There is also a map of the African continent as a scatter symbol at the start and the standard poker symbols at the bottom of the paytable. The music could be called typically African. Even though it is a bit cliché, it perfectly fits the theme and puts you in a good mood.

The gorilla is the most important animal in this game because it replaces the other jungle inhabitants as a wild symbol. Only the scatter symbol is excluded. Namely, this one triggers the free spins mode from 3 symbols and earns you an additional instant win. The free spins are 10 in number and are played with extra wild symbols. Moreover, this feature can also be retriggered while it is already active. You can also increase your winnings in the base mode with the Gamble feature, which appears as either Card or Ladder Gamble.

The King of the Jungle slot is available in a smartphone version so that nothing stands in the way of playing on the go in the mobile casino.

Wild symbol: The gorilla is the wild symbol and substitutes for all other symbols except the Africa card scatter to create successful paylines.

Scatter Symbol: The African continent map acts as the scatter symbol and rewards you with an instant win and multiple free spins when it appears three times anywhere.

Gamble Option: The gamble feature opens up when you have a win in the base mode. If you are a gambler, then here you have the chance to increase your winnings once again.