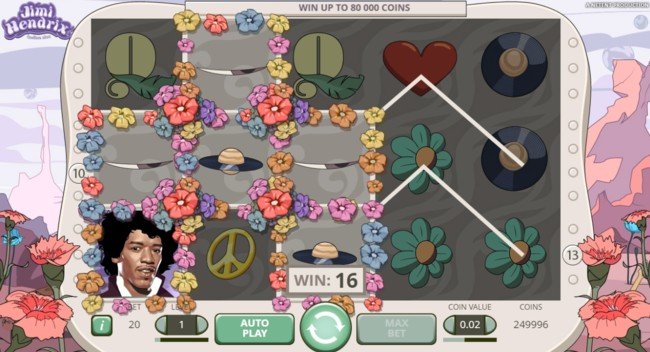 The Jimi Hendrix Online Slot is a tribute to the American music legend Jimi Hendrix, who as a guitarist, singer and songwriter is one of the greatest stars in the world and had a great influence on the development of the electric guitar in the history of pop music. Netent has now immortalized him in a 5-reel, 3-row, and 20 pay-line slots, the Jimi Hendrix Online Slot. The game features a grand prize of electrifying 80,000 coins.

The opening scene of the game gives an idea of the intensity of the slot when an animated Jimi Hendrix plays a well-known classic on the strings of his electric guitar. The next setting and background of the game is a comic-style view of a desert landscape. The top symbols are the face of Jimi Hendrix, a red and a white electric guitar, a peace sign, a heart, a record, a flower, and an eye. At the bottom, as always, the poker symbols A, K, Q, J, and 10 were used. As the reels move, the appropriate background music plays and other sound effects and aminations are used when you win or activate features.

The Jimi Hendrix Online Slot is played with a theoretical payout to the player (RTP) of 96.9% and allows stakes between €0.20 and €200.

At the Jimi Hendrix Online Slot, there is a good portion of features to discover. First of all, we would like to introduce the Jimi Hendrix Wild symbol, which can replace all other characters except the scatter. Then there are two more features that can intervene in normal game mode. You will listen to the melodious names Purple Haze Feature and Red Guitar Re-Spin Feature. The former is unlocked by a Purple Haze symbol, which must appear on the first reel for this to work. There it becomes wild and turns all poker symbols into the wild for the duration of the spin. In the Red Guitar Re-Spin feature, 4 or more of these symbols must appear anywhere for it to begin. Then you get a free re-spin, during which all the red guitars remain stuck in their place. If the re-spin reveals at least one more red guitar, then that guitar will also become sticky and the re-spin will start again. The whole thing continues until you can’t collect any more guitars. Next, we want to take a closer look at the pick and click feature. It is activated by 3 scatters on reels 3, 4, and 5 and promises one of four possible prizes, including an extra coin win, the Crosstown Traffic Free Spins, the Purple Haze Free Spins, or the Little Wing Free Spins. Three times the same symbol for each feature shows you what the prize is. The coin win includes a random multiplier between x8 and x30, so there are up to 6,000 coins in this option. The 3 Crosstown Traffic Free Spins offer 6 free spins with random reels full of wild. 3 Little Wing Free Spins symbols let you start between 6 and 12 Free Spins played with 3 to 5 Overlay Wilds.

The Jimi Hendrix Online Slot is also playable via smartphone. This way you can enjoy the full range of features even on the small screen via iOS or Android.

Wild symbol: The Jimi Hendrix wild symbol changes to any character except the scatter.

Scatter symbol: On reels 3, 4, and 5 the scatter can appear up to 3 times and then activate the pick and click feature.

Bonus games: The slot has three bonus features, the Purple Haze Feature, the Red Guitar Re-Spin Feature, and the Pick and Click Feature.