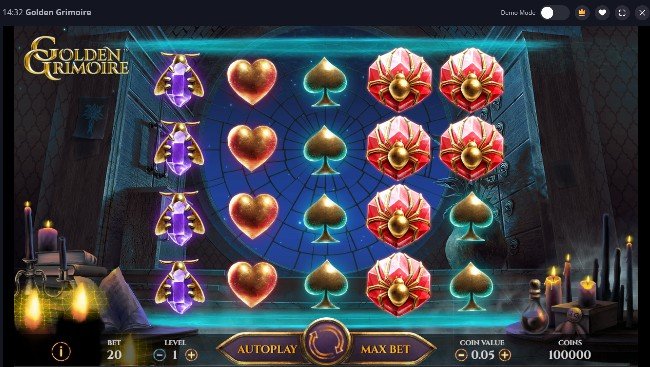 Golden Grimoire is a freshly released 5-reel slot with 40 fixed paylines from Netent brand new from 2019 with magical wild, free spins and mystery symbols. Conjure up winnings of up to 40,000 coins on a single spin on the reels in Golden Grimoire!

Golden Grimoire is based on a mysterious magic book. The symbols consist of four amulets and the same number of Poker symbols. There are great graphics that add to the mystical atmosphere and flickering candles plus starry skies. The soundtrack is playful and no less mysterious, almost making you feel a little whisper in your ear.

In terms of features, there is the mystery icon, which can appear on the third, fourth, or fifth reel at each turn. It then reveals one of the other symbols or a game. Once the Mystery symbols have changed into other symbols, Wild can also appear, replacing all other symbols except the Mystery symbol and the Scatter. A Scatter symbol on the odd-numbered reels triggers 8 free spins with Sticky Mystery symbols on the 2nd through 5th reels, which remain in the same place until the end of the feature.

The Golden Grimoire Slot is designed for your phone, tablet, and PC and can be played anytime with an Android or iOS powered device. Fans of magic books and mystery slots can also try Book of Dead from Play’n GO or Golden Book from Amatic.

Wild symbol: The wild symbol substitutes for all symbols except the scatter and mystery symbols.

Scatter symbol: Scatters appear only on the odd-numbered reels.

Free spins: You can unlock 8 free spins with 3 scatter symbols using the Sticky Mystery feature on the odd-numbered reels.

Bonus games: The Mystery Symbol can appear stacked on the middle three reels and reveal any other regular symbol or a wild when it comes up.