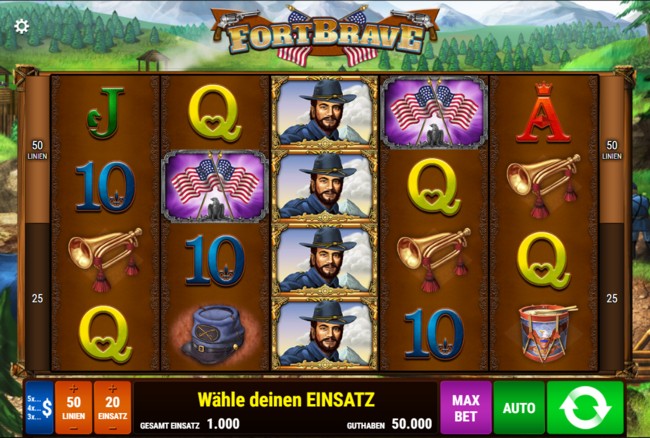 Fort Brave from Gamomat is just right for patriots because here you go on a journey through time to the American Civil War. The battlefield spreads over four reels and has up to 50 paylines, so take your chance to scoop the €6,000 top prize per line or get a little cash injection in the free spins mode with multipliers of up to x27.

The theme of Fort Brave is, as already mentioned, the American Civil War, and the symbols are designed accordingly. Included are a general, the American flag, cannons, and other items that can’t be missing on a war scene. The lower-ranking characters are the well-known card symbols. The music fits the theme and supports the whole set, but unfortunately, the sound effects will bring you back to reality.

There are a few exciting features in Fort Brave, starting with the American flag, which is the wild symbol. It replaces all other symbols in the game in this capacity. However, it can only appear on reels 2, 3, and 4. On the other hand, the watchtower acts as a scatter symbol, over which you can get 10, 15, or 20 free spins if you can ban the tower 3, 4, or 5 times anywhere on your reels. Each wild symbol on the screen is awarded a random multiplier in the free spins mode, which has a value between x2 and x3. This value is applied to the entire winning combination for that spin, regardless of whether the wild is part of the payline. In total, you can get a multiplier of up to x27. Fort Brave slot also has a gamble feature, where you can increase your winnings via card prediction or ladder climbing if you are a bit of a risk taker.

Fort Brave is also available as a mobile version for your smartphone to the delight of all mobile players.

Wild symbol: The American flag acts as a wild symbol and substitutes for all other symbols in the game. It also provides multipliers in the free spins mode.

Scatter symbol: The wooden surveillance tower is the scatter symbol, and if you can capture at least three of its kind anywhere on the reels, you will be directly rewarded with a win and free spins.

Gamble Option: The Gamble feature is optional, and you have the choice between the Card Gamble and the Ladder Gamble. In both variants, you have the chance to double your winnings, increase on the ladder or lose in the worst case.