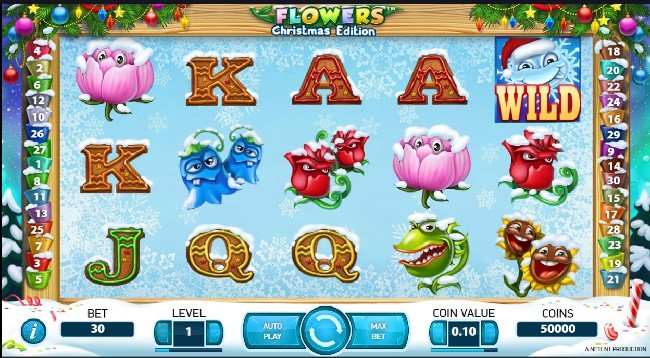 Christmas slots are among those games that are often best remembered, and the winterly Netent Slot Flowers Christmas Edition is one of the best examples. This is not only because of the prospect of up to 75,000 coins, but also because of the snow-covered flowers on its 5 reels, 3 rows, and 30 fixed paylines, which are guaranteed to put you in the Christmas mood.

To do justice to its Christmas theme, the Flowers Christmas Edition has a colorful design that includes Christmas decorations and candy canes. The symbols are again the five familiar flowers with their funny human features and faces. These comic-like plants can appear either singly or in a pack of two in one position and of course count accordingly. The lower poker symbols K, Q, J, and A are creatively formed from gingerbread and other Christmas treats. The reels are transparent, have a light blue ice color and some are even frozen. In the background birds are chirping when the reels start to move and there are a few more sound effects when spinning, winning, and triggering features.

For the Flowers Christmas Edition Slot Netent has set up a theoretical payout to the player (RTP) of 96.3% and betting limits from €0.30 to €30.

Among the features of this game is, first of all, a snowflake as a wild symbol, which can appear on any reel and replace any other symbol. Exceptions to this are the scatter for free spins and double flower symbols. The wild can also appear in stacks to increase your chances of winning. It is also possible to have a separate payline from wild only. Then 3, 4, or 5 symbols mean winnings of 250, 1,000, or 5,000 coins for you. The snow cloud is the scatter symbol and can appear as both a single and double symbol. At least four scatters anywhere also trigger between 10 and 30 free spins with multipliers between x2 and x10. The number of free spins and multipliers you have is determined by the number of scatter symbols. Between four and eight scatters are possible.

Besides the lucrative features and cool design, there is another advantage of Flowers Christmas Edition, because the slot can be played on computers as well as mobile devices. So you can also play via iOS and Android anytime and anywhere.

Wild symbol: The snowflake is a stacked game and can substitute for all other symbols except the scatter and double symbols. It can also build its own payline of 3, 4, or 5 symbols, giving you 250, 1,000, or 5,000 coins.

Scatter symbol: The scatter can appear as a single or double symbol and then of course counts as two single symbols.

Free spins: The game has between 10 and 30 free spins built-in, which are supplemented by multipliers between x2 and x10. You have to collect between four and eight scatters.