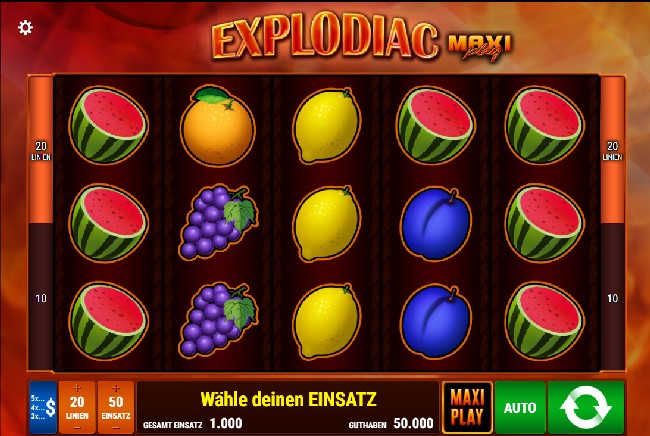 Explodiac is a fruit slot from developer Bally Wulff that has much more to offer than just juicy fruits and tasty wins. For example, how about €500 per payline on five reels, three rows, and ten fixed paylines?

The Explodiac slot has the Lucky 7 as the top symbol, and behind it, there are also watermelons, grapes, plums, oranges, lemons, and cherries, which are part of the essential equipment of any fruit slot. The sound effects are in the standard range.

The bomb is the wild symbol and substitutes for any other symbol when it appears on the 1st, 2nd, and 3rd reels. Once it is there, it also explodes in keeping with its status, turning all surrounding symbols into Wilds. Thus, up to nine wilds can be created in total. The second feature in Explodiac is the Gamble feature, which has both the Card Gamble and the Ladder Gamble on offer. Both versions offer you a 50:50 chance of doubling your winnings. However, you can also lose it completely. The feature is optional, and the decision is yours every time.

Explodiac slot is available both online and on the go via iOS or Android. Even though this game doesn’t have many features and might get a bit monotonous in the long run, it’s a popular theme and quick and easy to play.

Wild symbol: The bomb is the wild symbol and substitutes for all other symbols in the game when it appears on reels 1, 2, and 3. Also, an explosion takes place where surrounding symbols also become Wilds. The explosion creates up to nine additional wilds.

Gamble option: in Explodiac, you will come across two gamble features triggered after a win and are optional. You can either tap the color of the face-down card or climb the prize ladder to end up getting double your winnings.