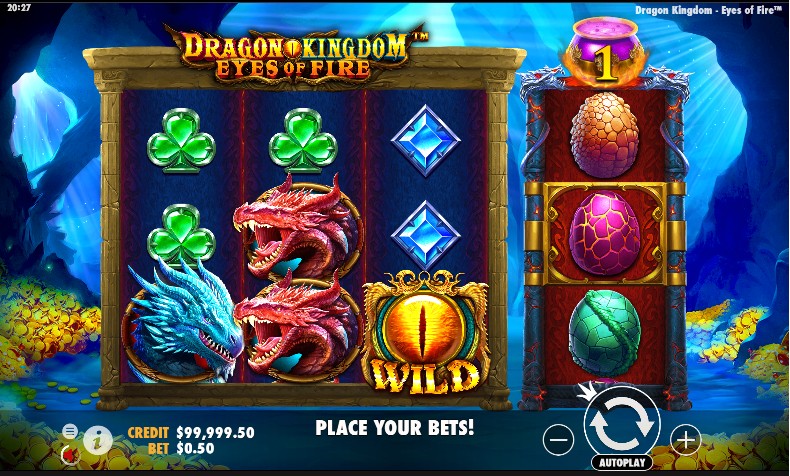 There are no free spins in this online slot. In fact, there is only one bonus feature, which is the Progressive Feature. Unlike all other slot games, the goal is to collect spins for as long as possible without winning.

After at least four dead spins, the fourth reel on the right side is activated, which consists of multipliers. The later the reel is activated, the higher the multipliers increase, so you can look forward to multiplying your winnings between x2 and x50.

After a WinSpin and the payout of your winnings, the 4th reel resets and becomes inactive again until another win is generated.

The machine is set in a dragon’s lair flooded with blue light and littered with gold coins. Lord of the Rings fans may be reminded of Smaug’s cave.

The dragons themselves can be found as winning symbols on the reels, one blue and one red. There is also the namesake Eye of Fire wild and several gems.

The Dragon Kingdom Eyes of Fire slot RTP is 96.50%, and the volatility is rated as low. Especially the volatility is very unusual for game manufacturer Pragmatic Play, but justified by the mechanics with the many deadspins.

Set your round bet, and you can start spinning the reels. As you can guess, you will have to be patient, but it will pay off.

After several dead spins, a win will finally be generated and reward you with high winnings thanks to the win multiplier.