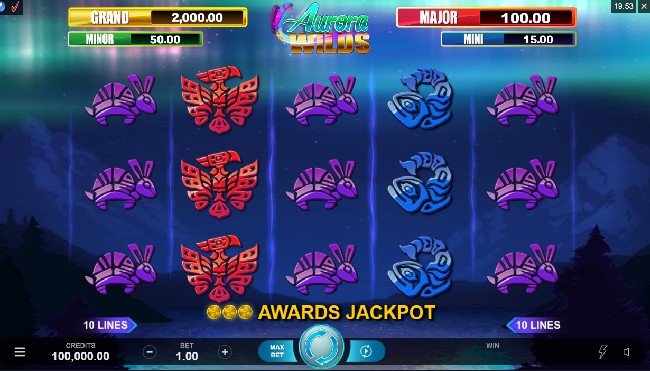 The Aurora Wilds Slot. Aurora Wilds is a 5-reel, 10-line slot with the Pay-both-Ways feature from Neon Valley Studios for Microgaming. The game includes expanding Wilds, re-spins, and a jackpot wheel with winning potential of up to 2,000x your wager!

The slot is played in a 5×3 layout and shows transparent reels that show the night sky behind, rising above snow-covered mountains. The graphics are not the best, but they serve their purpose. Aurora Wilds deals thematically with the mythology of the Indians and is quite spiritual. The symbols include the bar, a Lucky 7, a red bird, an orange moose, a green turtle, a blue fish, and a purple hare. The soundtrack also fits the mysterious aura.

The game mode with a payout in both directions works from right to left and from left to right. This includes expanding wild, which can appear on reels two to four, replacing all other symbols except the jackpot symbol. The game expands when it can generate a win like this and provides a re-spin where the reel remains rigidly in position. Another re-spin starts up to three times when you get more expanding wild.

Last but not least we want to have a look at the jackpot and it comes in the form of a Grand, Major, Minor, or Mini Jackpot. The jackpot wheel holds winnings between 15, 50, 100, and 2,000 times your bet.

Aurora Wilds is easy to play on all major smartphones, tablets, and even your PC. Set yourself up for a highly volatile slot with a winning potential of up to 2,000 times. This means you’d better have a slightly larger bankroll, so you can play longer to bring home the biggest possible win.

Wild symbol: The expanding wild substitutes for any other symbol except the jackpot wild.

Bonus games: Re-spins are activated when an expanding game appears on the reels.